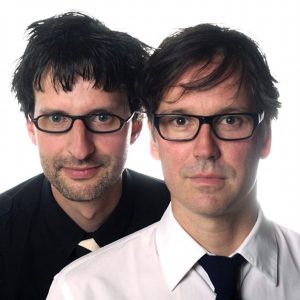 MOC, that’s Wolfgang Schmetterer and Anatol Locker. They live in the same neighborhood in Munich, Germany, just around the corner for years. Then, finally, a mutual friend brings them together. With a „Well, let’s give it a try.“ their creative collaboration begins, which now lasts for 15 years and five albums.

They come from very different directions. Schmetterer learns to play bass and all because of dub. Being a pop eclectic, he blends punk, minimal music, and electropop genres. He also loves audio art and tongue-in-cheek humor. Under the moniker „Magentaa,“ he releases joyful electronica and treats himself producing pop songs.

Locker takes piano lessons as a kid but gets into electronics, computers, modular synthesizers, and crude tech gadgets, always on the lookout for the next unheard sound. He experiments with ambient and figures out music collage techniques. In addition to MOC, he plays with Martha Bahr in the modular duo „Lucid Grain.“ He considers Game Boys to be full-blown musical instruments and control voltage a great invention of humankind.

MOC’s fifth album, „Diorama,“ is highly multi-faceted. At the first listen, the ten tracks are open and accessible. But if you drill deeper, you will be richly rewarded: Diorama unfolds an inviting sound cosmos for those who want to delve deeper.

The typical MOC tempo has always been the same as relaxed head nodding. However, in some tracks, Wolfgang and Anatol take more time to build up sound dioramas, develop melody arcs, take listeners by the hand, and lead them friendly through their soundscapes.